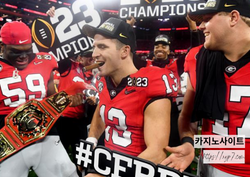 Whatever your answer, it sure as hell wasn’t Monday when the No. 1 Bulldogs won their second straight College Football Playoff National Championship and stripped not only their opponent but the rest of the sport of all hope.

What else are you supposed to say in what qualified as the biggest beatdown ever a national title game?

Georgia scored nine touchdowns, won by more than eight touchdowns against outmanned No. 3 TCU and sent a shiver of fear through the other 129 FBS teams that read something like this: Don’t even think about it.

After losing a record 15 players to the NFL Draft, after surviving a trip to Missouri (of all places) and after being down by two touchdowns in the CFP semifinal, Georgia left no doubt. That and a trail of victims 17 games long standing as the nation’s leading winning streak.

None of it begins to describe what transpired Monday night in L.A. The result was so complete that quarterback Stetson Bennett IV was almost a sidebar. Almost. The sixth-year former walk-on completed an unlikely career with an all-time performance: four passing touchdowns, two rushing touchdowns and a well-deserved curtain call in the fourth quarter.

Talk about a walk off. Georgia coach Kirby Smart called a timeout so his aged quarterback for the ages could do just that before the adoring SoFi Stadium crowd.

Even Bennett had to stand behind the main headline after the 65-7 mauling of TCU: Georgia is the first team to win consecutive national championships in a decade and first ever to do it in the CFP era, taking the second by a record margin in an FBS bowl game (58 points). Smart was Nick Saban’s coordinator on the last team to go back-to-back (Alabama, 2011-12).

Where does college football go from here? For now, the answer to that question goes through Athens, Georgia.

“We have a saying around our place: ‘You have to eat off floor. If you’re willing to eat off the floor, you can be special,'” Smart shared.

Gross, yet fitting. These Dawgs were both of the junkyard variety and dominating breed. Smart harped on his players after winning the 2021 title, reminding that they weren’t defending anything. This was a new year. Twenty months ago, Bennett didn’t take one snap in 2021 spring practice. On Monday, he became the sixth quarterback since the 1970s to win consecutive national titles.

Bennett’s only pushback this past week was complaining about the early start to practice and not having enough free time. Smart’s response: “You only get once chance to be legendary. I’m not going to leave any regret out there.”

And so, in the city that invented the three-peat, Georgia created its chance to become the first program to win three straight undisputed college football national championships. The last to do it at all was Minnesota, which split its titles as awarded by the media from 1934-36.

Judging by his postgame comments, Smart was already thinking about the possibility.

“The disease that creeps into your program is called ‘entitlement,'” Smart said. “I’ve seen it firsthand, and if you can stomp it out with leadership, then you can stay hungry.”

That winning streak might as well stretch to the horizon. Not Alabama, not Clemson, not even close at this point. Georgia is the sport’s new standard.

“I would say it sends the message that Georgia is the new powerhouse in college football,” running back Kendall Milton said.

New? Hardly. Georgia is 33-1 in its last 34 games. Its 29 wins over the last two season ties the major college record. Smart is 73-10 since 2017. Bennett leaves after six seasons — five of them at Georgia — accounting for 15 touchdowns in four playoff games. There was a time he wouldn’t get four snaps in a practice.

Georgia’s 65 points were the most in the championship game era (1998). The 58-point margin of victory was the most in any bowl game, ever.

This despite the Dawgs entering as the biggest favorites in CFP history (13.5 points, according to Caesars Sportsbook). They covered with 44 points left to spare. At one point early in the third quarter, UGA had run 45 plays and scored 45 points.

But if one needs a turning point, perhaps it was eight years ago when Smart left one dynasty at Alabama to form another at his alma mater. That’s why Monday was more of a continuation than a landmark.바카라사이트

Win or lose, there was going to be a dynasty discussion about these Dawgs. Now the “D” word might as well be etched in the hedges at Sanford Stadium. Seven years into his career at Georgia, Smart has a better record than Saban did at the same point (81-15 v. 79-15). Smart trails Saban 3-2 championships after seven years, but that’s a minor detail given the Georgia coach is 24 years younger than his former boss.

Georgia’s stranglehold on the sport looks as tight as the one Alabama once gripped. On Monday, Georgia knocked Cinderella into a ditch.

“You know how people talk about we are being hunted?” asked RB Kenny McIntosh. “We’re the hunters. We don’t get hunted.”

Every team in the country wants the blueprint, and they’ll try to get it, too. But Smart has already fortified the roster, and even his assistants seem to be sticking around.

A tweet went out to Aaron Murray late in the first half. As the Dawgs was mopping the SoFi Stadium turf with various Horned Frogs, it became important to reach the program’s career leading passer.

Please, he was asked, try to put some context on Monday’s butt-whipping in the CFP National Championship. For starters, is Bennett the greatest Georgia quarterback of all time?

Murray added: “Stetson is now the greatest player in UGA history! Put his resume up against anyone after tonight. It can’t be touched.”

Such an absolute can be argued. Here’s one that’s inarguable, though: Bennett is finally done. The absurdity of the end for one college football’s best players — he has to be called that now — is that Bennett can never make the College Football Hall of Fame. It is served only for first-team All-Americans.

“I’ve been here long enough,” he said after the game. “I’m sure there’s some game tape [for NFL teams]. I don’t know — [I’m a] hard worker, pretty good at football, smart. But they’ll see that. I don’t know. That will take care of itself. Today, we’re national champs.”

It’s trite to say Bennett has his whole life ahead of him, thought he is at least the second-oldest quarterback to win a national championship since Chris Weinke led Florida State to a title in 1999 at age 27.

Smart found his 10-year son Andrew crying in the bowels of SoFi Stadium after the game.

Next up is a group of as many as 15 returning starters. Georgia will enter 2023 as the preseason No. 1. There will be new stories to be written.

“Once you get to college, it doesn’t matter,” said QB Carson Beck, a redshirt sophomore who will battle for the starting job next season. “Once you get on campus, everybody is a dawg — especially at the University of Georgia.”

Where everybody is a … Dawg.

Will it ever end? Not anytime soon. Not with 2023 nonconference games against UT-Martin, Ball State and UAB to kick off next season. Not with Georgia’s first road game coming Sept. 30 at Auburn.

Face it: It might be worth getting some action with your favorite sportsbook on that three-peat.

The way this is trending, Georgia on its own might squash the idea of a 12-team playoff. Why bother? The championship was the SEC’s 13th in the last 17 years. After 41 years without one, Georgia has now cornered the market on national titles. 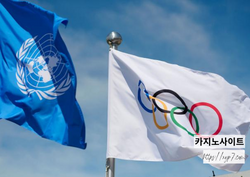 The United Nations General Assembly has passed a new landmark resolution, recognising the role that sport can play in bringing about sustainable development.카지노사이트 In the face of ongoing wars, deteriorating economy and climate change, the UN General Assembly has adopted a consensus resolution and recognised the transformative power of sport in advancing sustainable development and… 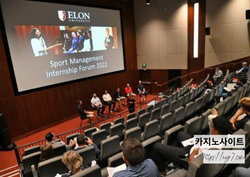 As he recalled his summer internship as a fan ambassador for his beloved Boston Red Sox, Adam Faberman ’23 shared an anecdote even he can hardly fathom.카지노사이트 The sport management major’s supervisors tasked him with transporting the Red Sox’s 2018 World Series trophy to a local community event. And he did so using his personal…